x
College Football, Jews
We Americans, especially Jews and supporters of Israel, are facing daunting issues: growing anti-Semitism,...
College Football, Sports
As the architect of the modern N.C.A.A., Byers became stuck in the contradictions...
Football, NFL, Television
The catalyst for pro football’s breakthrough in the latter half of the 1950s and... 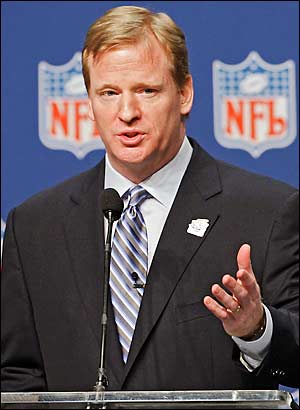 The N.F.L. was blindsided by the magnitude of the Dolphins’ bullying scandal and by...
America, Football, NFL

Over the past 12 years, as Americans have sought a distraction from the moral incoherence of the wars in Afghanistan and Iraq, the game has served as a loyal and satisfying proxy. It has become an acceptable way of experiencing our savage impulses, the cultural lodestar when it comes to consuming violence. What differentiates it from the glut of bloody films and video games we devour is our awareness that the violence in football, and the toll of that violence, is real.

The struggle playing out in living rooms across the country is that of a civilian leisure class that has created, for its own entertainment, a caste of warriors too big and strong and fast to play a child’s game without grievously injuring one another. The very rules that govern our perceptions of them might well be applied to soldiers: Those who exhibit impulsive savagery on the field are heroes. Those who do so off the field are reviled monsters.

The civilian and the fan participate in the same basic transaction. We offload the mortal burdens of combat, mostly to young men from the underclass, whom we send off to battle with cheers and largely ignore when they wind up wounded.

The introduction of football made the holiday more appealing to many men. By adding listening to an athletic contest to a feast, families recognized that popular entertainment on the radio enhanced the celebration. Listening to the game was not simply a new custom added to the family feast; it became a central attraction of the holiday for men. While the domestic occasion of the early nineteenth century represented the feminization of the middle-class home, radio broadcast of the game at Thanksgiving helped masculinize the domestic festival.

Elizabeth Pleck, “The Making of the Domestic Occasion: The History of Thanksgiving in the United States”, Journal of Social History 32, No. 4 (Summer 1999), 784.

In the 1920s, football finally moved into the home, rather than being merely a form of outdoor amusement which threatened to overwhelm the domestic celebration. The family might dine and then listen to a football game on the radio as a form of after-dinner entertainment. By 1956, football games were televised. Popular entertainment has enhanced home celebration in the twentieth century, whether it was the Christmas program on radio or television or the broadcast of a football game. There is always the question of whether listening to the football game in the living room represented a distinct stage of reinvention of the holiday, or simply a new custom attached to the nineteenth-century notion of feast and homecoming. Men, listening avidly to the game at home, probably thought it was a significant reinvention. They quickly came to regard listening to the game as traditional, part of what made the ritual authentic and meaningful.

Families scheduled their dinner so that they would be finished eating by the time the football game began.

Elizabeth Pleck, “The Making of the Domestic Occasion: The History of Thanksgiving in the United States”, Journal of Social History 32, No. 4 (Summer 1999), 782.

What was lost on these devotees of the game was the irony in a family event, punctuated by (mostly) men listening to a game noted for its aggressive body contact, warlike language, male bonding, and the ability of contestants to withstand pain. There had always been gender segregation at the Thanksgiving meal, with men talking to other men, and women conversing with women before and after the meal. As women in the kitchen washed the dishes, and men listened to the game, one could recognize that women (willingly) gave up their leisure, and that men and children benefitted from female sacrifice. Men and women also occupied separate spaces in the home on Thanksgiving, although it was easier for a woman to enter the living room where men were listening to the game than for a man to don an apron and help in the kitchen.

Encamping in the living room, men seemed to find solace in an all-male group, after having participated in an event so female in ambience. One function of football, even enjoyed vicariously, was to reaffirm men’s bonds with other men and their masculinity, to inject some manliness into the sentimentality. Sons, listening to the game with their fathers, were learning the rules of male sociability – and being weaned away from their mothers. Listening to football was an additional masculine element that followed the ritual of carving the turkey, man the gladiator side by side with man the hunter. As such, the football game on Thanksgiving Day provided an added symbolic statement about the difference between the genders.

Lower-class men had been making merry and poking fun at their betters for centuries, on Thanksgiving and other holidays. In the late 1880s, the upper class developed its own form of misrule in their exuberance after Thanksgiving Day football games. An organization run by college students, the Intercollegiate Football Association, scheduled its first championship game on Thanksgiving Day in 1876. Two decades later the Chicago Tribune estimated that about 10,000 high school and college teams, and those of athletic clubs were playing football on Thanksgiving Day.

The Thanksgiving Day game was controversial from the beginning. Walter Camp, the “father” of modern football, argued that the fact that fans willingly gave up – or in some cases, postponed – their Thanksgiving dinner to cheer for their team showed the popularity of the game. To ministers and Ethelbret Warfield, president of Lafayette College, football on Thanksgiving desecrated “a great national feast-day.” Warfield regarded Thanksgiving as a day to give thanks to God for the blessings of “the Christian home” and “citizenship.” He believed that whooping college boys, storming theaters, starting fights at “saloons, dancehalls, and worse” were taking the first steps in a life of “temptation and vice.” The collegians were also getting themselves arrested, disrupting Broadway performances, and throwing beer mugs and glasses at high-stepping showgirls. In 1894, Ivy League college presidents, embarrassed by all this, shifted the day of the season-ending game to the Saturday before Thanksgiving, moved the location from Manhattan to college grounds, and insisted that students return to campus after the game had finished.

Elizabeth Pleck, “The Making of the Domestic Occasion: The History of Thanksgiving in the United States”, Journal of Social History 32, No. 4 (Summer 1999), 777.

Macy’s parade, even in the 1920s, existed not in the shadow of the family feast or the church service, but in competition with the afternoon football game. Football was clearly the more significant of the two forms of out-of-home entertainment, as changes in the timing of Macy’s parade in the 1920s indicate. Initially Macy’s parade offended patriotic groups, who decried a spectacle on “a national and essentially religious holiday.” Macy’s hired a public relations man, who decided that the critics could be placated if the parade in the morning was postponed until at least after church services had ended. The parade, pushed back to the afternoon, began at the same time as the kickoff for most football games. Customers and football fans complained. By the late 1920s, Macy’s had returned to an early morning parade, presumably so as not to compete with afternoon football games.

Elizabeth Pleck, “The Making of the Domestic Occasion: The History of Thanksgiving in the United States”, Journal of Social History 32, No. 4 (Summer 1999), 782.