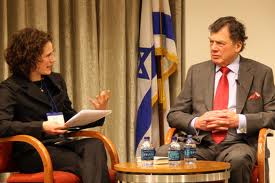 Like synagogues, the Jewish federation system (usually referred to simply as “Federation”) is another area that once defined community for North American Jews. The federation system is the central address of Jewish charities, and each community has a local federation to which community members donate money. The federations, in turn, finance hospitals, old-age homes, Jewish schools, advocacy for Israel, and Jewish Community Centers. Significant funds go directly to Israel, and another portion is earmarked for overseas aid. …
Today, however, Federation seems distant from the lives of most Jewish young people. The Jewish federation system, now represented by the national umbrella organization called the United Jewish Communities (UJC), has not kept up with the needs of today’s Jewish youth. The UJC was formed in 1999 after a merger of the Council of Jewish Federations with the United Jewish Appeal and United Israel Appeal and, at first, had great ambitions to form various subgroups to promote the renaissance and other worthy ideas. Unfortunately, this never happened, and the federation system struggles financially and with its role in Jewish life.
Part of the problem the federation system faces is the result of a generational shift in the way Jews give. We are now facing two trends that make giving by Jews both less generous and less Jewish. The first has been the tendency of the younger generation of major Jewish donors to give large sums of money to hospitals, colleges and universities, art museums, operas, and symphony orchestras on a less parochial basis than did the earlier generation. Younger Jews tend to feel less connected to the Jewish community and more thoroughly integrated into the larger society, and their giving reflects this. It can no longer be assumed that Jews will donate to their local Jewish federation.